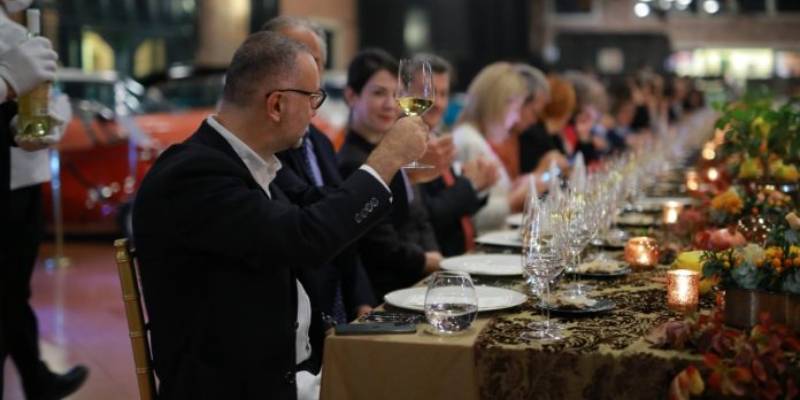 The International Gastromasa Gastronomy Conference, which hosts world-renowned chefs, opinion leaders and creative pastry chefs in Turkey every year, brought together world gastronomy in Istanbul for the 6th time after a two-year hiatus. Before the conference held at the Haliç Congress Center, the guest chefs went on a tour of Istanbul for a few days and had the opportunity to get to know Turkish culture and cuisine closely by visiting the most special taste spots of the city.

A welcoming dinner for successful chefs who came to Istanbul from many different parts of the world was held in Alaf Kuruçeşme. Chef Murat Deniz Temel not only surprised our guest chefs with delicious plates, but also reflected the traces of thousands of years of Turkish culture on his menu.

The opening of the Istanbul tour was held in the most special place where cultures meet, the Hagia Sophia Mosque. It was inspiring for all guests to see this masterpiece bearing the traces of different religions. Afterwards, world-renowned chefs went to Matbah Restaurant, where they tasted traditional sahlep and met this special flavor for the first time. Then, passing through the historical streets, we went to the Spice Bazaar, one of the oldest points of Istanbul gastronomy. The guests wandered around the colorful stalls, tested different spices and products, and did a lot of shopping.

The address for lunch on the first day of the Istanbul tour was Zennup 1844. Chef Ömür Akkor, who traveled every inch of Anatolia and followed the traces of ancient flavors with dozens of books he wrote, impressed himself with his delicious plates. In the evening, a wonderful gala dinner was hosted by Halat by Divan, where all the guests met. The guests gathered around a long table and enjoyed a wonderful ambiance and menu.

On the second day, the guests who continued their Istanbul tour attended the baklava workshop held by Karaköy Güllüoğlu General Manager Murat Güllü. After watching the skills of the masters who devoted their years to this profession, once again amazed by this effort, the chefs crowned this pleasant experience with Turkish coffees prepared with Arzum Okka. For the second day’s lunch, the route was Turk Fatih Tutak. Chef Fatih Tutak presented the guests with a special menu prepared with his unique interpretation of traditional flavors. After lunch, the guests, watching the Bosphorus on a boat, attended a private party at the Gastronometro. Successful chefs, who had the opportunity to experience the special flavors of Turkish cuisine in the tasting rooms, where many different flavors are available, spent an enjoyable evening with live music.

Özgül Özkan Yavuz, Deputy Minister of Culture and Tourism, in her opening speech; “Considering the place that creativity and design concepts occupy in our lives in today’s world, I have to state that it is really the right choice. From the preferred plate to the food served on the plate, from the way the food is served, from the table setting and the decoration of the dining room to the menu, design is present at every stage of gastronomy. Flavor is important, but visuality must be used to persuade you to experience that flavor. For this reason, even the names of higher education or other educational institutions that train human resources for the sector are now used as Gastronomy and Culinary Arts, referring to the importance of “design”. Gastronomy is one of the most important components of our culture and an “art”. At this point, I would like to make a special reference to the tables where the rich Turkish cuisine turns into a visual feast. The guest city of this event, Gaziantep, one of the representatives of the UNESCO Creative Cities Network in our country, stands out with its cuisine, dishes and presentation style. I believe our guest chefs will be of interest. And again the kitchens of Hatay and Afyonkarahisar. The cuisines of these three cities always draw attention not only with their tastes but also with their visuals. Food is never just food… Food now has a much deeper meaning. In today’s conditions, a person who sees a dish or a chef’s plate on the internet or social media can afford to travel thousands of kilometers to have that experience. Now we all see that things are evolving into different dimensions. Now all chefs are gastrodiplomats, so to speak.”

Gaziantep Metropolitan Municipality Mayor Fatma Şahin; “We are very happy to be in Gastromasa as a guest city. Gaziantep is one of the most important gastronomic cities of the world with the richness of its thousands of years of ancient history. When our experience in this field and the vision of world-renowned chefs come together, this wealth increases and the past and the present meet at a single point. As you know, our city of Gaziantep joined UNESCO’s “Creative Cities Network” in 2014. It became the first city of Turkey to enter this network in the field of gastronomy. We know that Anatolian cuisine is a solidarity, unity, brotherhood, abundance, tolerance and embrace. That’s why it’s very important for us to be here today. I think gastronomy is the most beautiful detail that reflects the roots, character and lifestyle of a country. Ensuring world peace and tolerance is based on knowing and understanding each other. For this, there is no better way than meeting around the same table. We look forward to the special presentations of our esteemed chefs. I would like to thank everyone who supported this special event.”

Gökmen Sözen, General Manager of Gastromasa, stated that they have started working to realize Gastromasa in other countries in the future; “It is a great honor for us to host the most important names of world gastronomy in Turkey. Gastromasa is now one of the four most important gastronomy conferences in the world, in this journey we embarked on to build a bridge between cultures. We establish gastro-diplomacy networks, increase the global integration of Turkish gastronomy, and contribute to the development of gastronomy tourism with this event, which we organize with different themes every year. We are proud to be Turkey’s gateway to the world in this field. Because Gastromasa is Turkey’s gastronomy brand in the world. This year we are together with the theme of “Design”. Next year, we will have the theme of sustainability and biodiversity, which is one of the most important agenda items in the world.”

Metro Wholesaler Market CEO Sinem Türung; “As Metro Turkey, we have been working for more than 30 years in order to protect Turkish cuisine, to reveal the true potential of Turkish cuisine culture, and to contribute to the development of Turkish chefs and ensure that they reach the place they deserve in the world. This lofty purpose takes us beyond just being a retailer that puts products on its shelves. In line with our efforts to protect our local flavors and to announce our Geographically Indicated products abroad, we attach importance to collaborating with chefs and bringing them together on platforms where they can share their knowledge and experiences. We are happy to support the International Gastromasa Gastronomy Conference since its first years, as it very much overlaps with our purpose.”

İlker Aycı, THY Chairman of the Board; “This event creates excitement not only here but in every corner of Turkey. We say; If you want to get to know someone, trade with them, go on a trip with them, or dine with them at the same table… If you want to be good friends with someone, sit at their table and invite them to your table. That’s how important gastronomy is. Turkish cuisine is strong enough to be talked about all over the world today. I believe that together we will be able to be talked about everywhere,” he said.

Turkish Cuisine Researcher Vedat Başaran, who says that culinary cultures are related to each other; “We gathered around a brother’s table today. It is a beautiful feature of the Turkish nation to share everything together at this brother’s table. I would also like to thank dear Gökmen, who has brought this to this point for years and put a lot of effort into it. I would like to thank Gökmen Sözen for bringing all these people to our country despite the pandemic conditions. I hope the festivity of this table will continue for many years,” he said.

World-renowned star chefs shared their culinary experiences with the audience on the stage of Gastromasa, one of the most important gastronomy organizations in the world. The organization, which was broadcast live on social media and the internet, attracted great attention from Turkey and the world. Gastromasa, which will cover the theme of “Sustainability” next year, maintains its feature of being the gateway of Turkish gastronomy to the world with the impact it has created.