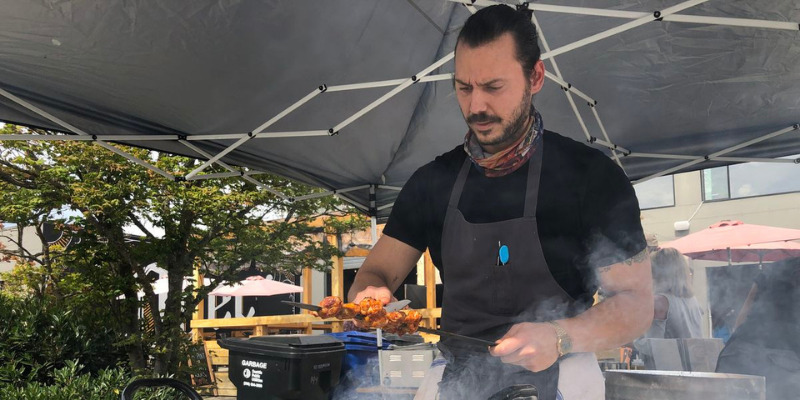 Couple Berk Güldal and Katrina Schult stunned the Seattle dining scene with Turkish food unlike any the city had experienced before when the pair left the three-Michelin-starred SingleThread restaurant in California to start a Seattle pop-up called Hamdi in the summer of 2021.

At the pop-ups (most frequently held at Ballard’s Fair Isle Brewing), Güldal would roast whole lambs over a wood fire and serve kokorec (lamb sweetbreads stuffed in lamb intestine) sandwiches and meltingly tender hand-minced lamb kebabs, Hamdi’s signature dish. Cooked medium rare and brightened by a salad of tomatoes and onion, the kebabs shared only a name with the dry kind found at many of the gyro shops in Seattle. Lines quickly formed at the pop-ups, and the food sold out quickly.

Now, Hamdi is turning into a brick-and-mortar restaurant sometime this month in Ballard on Leary Avenue, seeing up in the former space of Tarsan i Jane, a critically acclaimed fine dining Valencian restaurant that closed in 2020 after four years of business. With a permanent location, Güldal wants to share Turkish and Anatolian culture and cuisine through every aspect of the restaurant.

“We want to represent Turkish cuisine. We want to show how big and diverse it is,” Güldal says.

Though Turkish food is vast, having been created by Ottoman chefs with access to flavors from Greece, Syria, and beyond, Güldal says it is underrepresented among fine dining restaurants in the U.S. Güldal grew up in Istanbul, went to culinary school there, and trained at one of the city’s oldest restaurants, Haci Abdullah Lokantasi, established in 1888, where he learned traditional Ottoman cooking techniques and recipes after a stint on the Turkish national rowing team. He then moved to New York to work at some of the world’s best restaurants, including Eleven Madison Park. At Hamdi, Güldal says he wants to serve those traditional recipes, filtered through his experience in fine dining and incorporating the ingredients of the Pacific Northwest.

Hamdi’s restaurant space is one room fitting 46 seats, including a 10-seat semi-circular chef’s counter facing a wall with a large charcoal grill and a wood-fired oven. There is no gas range in the restaurant, and every dish — from the many cold vegetable dishes to the signature kebab — will be cooked with wood or charcoal, imparting a hint of smoke to every bite.