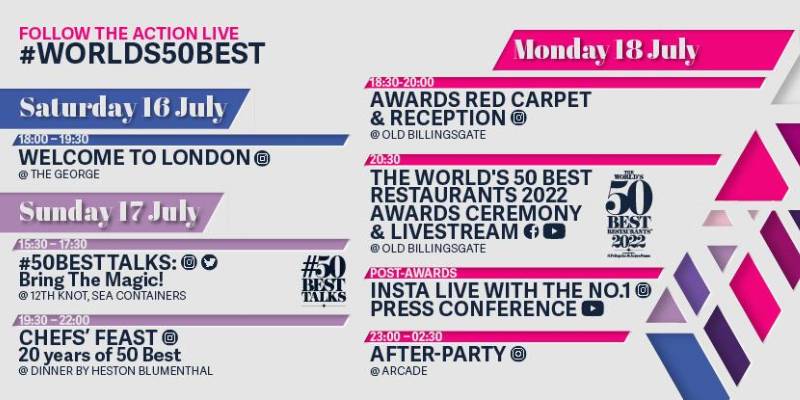 The 20th anniversary edition of The World’s 50 Best Restaurants, sponsored by S. Pellegrino & Acqua Panna, will be revealed on Monday, 18th July 2022.

The red carpet was prepared, and the stage concept was established

The World’s 50 Best Restaurants started counting the days to come to London. On Monday, July 18, chefs, restaurateurs and food lovers from all around the world will take their seats at Old Billingsgate, the old fish market overlooking the River Thames; and The World’s 50 Best Restaurants 2022 list will be announced with the sponsorships of by S. Pellegrino & Acqua Panna.

Ahead of the Awards, 50 Best will unveil this year’s edition of the expanded list on 5th July to shine a spotlight on a greater number of hospitality establishments across the world.

To kick off the celebrations in London, some of the world’s best chefs will be donning their whites at the city’s premier restaurants. The 50 Best Collaboration Dining Series will feature eight unique dining experiences for lunch and dinner from Friday 15th to Tuesday 19th July.

The world’s most influential restaurateurs will take the microphone at this year’s edition #50BestTalks. Presenting their best tips for unforgettable hospitality, the star-studded cast includes Will Guidara of Eleven Madison Park fame; Birgit Reitbauer of the Art of Hospitality Award 2021 award winner, Steirereck in Vienna; Emi Hasegawa of the inimitable Den in Tokyo; and legendary Josep Roca from ‘Best of the Best’ restaurant El Celler de Can Roca, among others.

It’s the moment the gastronomic world has been waiting for

The countdown from No.50 to No.1 of The World’s 50 Best Restaurants 2022. Alongside the unveiling of the new list, the awards ceremony will also feature the presentation of special awards and a celebration of the venues ranked between 51-100.

The 20th edition of the World’s 50 Best Restaurants list, sponsored by S. Pellegrino & Acqua Panna, will be revealed on Monday, July 18, 2022. The latest news and announcements will be broadcast live on the social media accounts of the 50 Best Restaurants.