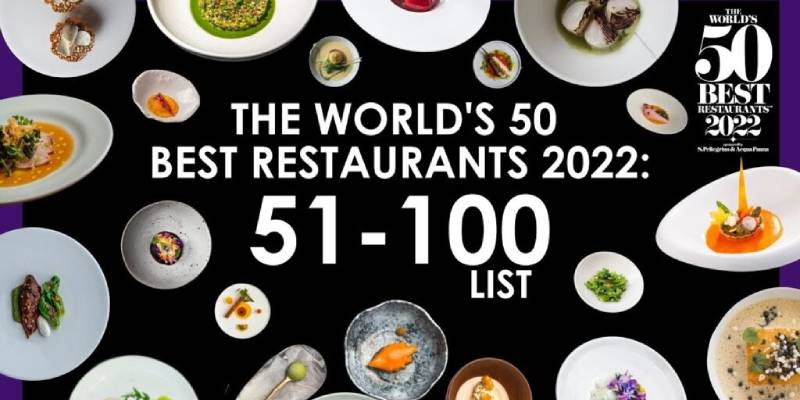 Sponsored by S.Pellegrino and Acqua Panna, “The World’s Best Restaurants 2022” will announce its top 50 list at the red carpet ceremony in London on July 18. While the whole world is waiting for the Top 50 ranking, The World’s Best Restaurants 2022” has published the ranking of 51-100 restaurants before the countdown. Celebrating its 20th anniversary, the award ceremony was prepared by the voting panel of 1080 independent authorities, from renowned international chefs and food journalists in the gastronomy world to traveling gastronomes.

Businesses from 15 different cities took part in the ranking, which allowed many accommodation businesses around the world to increase their visibility. With the addition of new entries from the Middle East, the Asian continent was the continent with the most participation with 14 countries in the list, which includes restaurants from 22 regions in six continents. It was followed by Europe with 13 countries and North America with 11 countries. Oceania, on the other hand, became the continent with the fewest locations with only 1 restaurant. It also added restaurants from 5 new locations, including Argentina, China, Germany, Singapore and the United Arab Emirates, compared to the 51-100 list shared last year.

“It is great to witness this growth as the world of gastronomy continues to recover and rebuild after major challenges during the pandemic,” said William Drew, Content Director at The World’s 50 Best Restaurants. He concluded by adding that he was looking forward to the award ceremony that will take place on July 18.

Professional service consultancy Deloitte independently evaluates the “World’s 50 Best Restaurants” list, including rankings 51-100. This decision ensures that the integrity and authenticity of the voting process and the resulting lists are preserved.