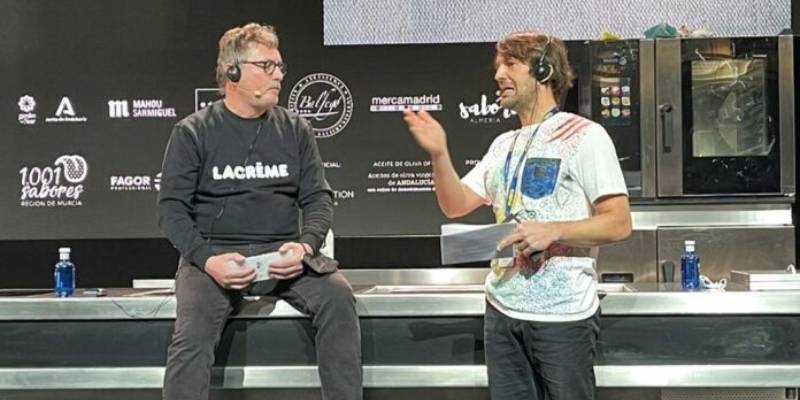 The Madrid Fusión auditorium overflowed.The Danish chef René Redzepi (has 3 Michelin stars with ‘Noma’), which in its 20-year history has been chosen five times as the Best Restaurant in the World has starred in one of the most anticipated talks, together with Andoni Luis Aduriz (has 3 Repsol Guide Suns and 2 Michelin stars with ‘Mugaritz’) at Madrid Fusión which ended yesterday. Under the title “Encounter of Thoughts”, both have discussed about creativity, progress, cooking background, environment, and ultimately the future of gastronomy.

Andoni Luis Aduriz, sitting comfortably in the kitchens on stage, acted as interviewer for the Danish chef René Redzepi, whose gastronomic proposal is an authentic devotion to the environment and nature, and where fermented foods and marinades play a fundamental role. “You have fermented everything that could be fermented and you have socialized it, you have spread it to kitchens around the world,” Andoni told his colleague. “Fermentation is the most incredible thing there is,” said René, 44, before his attentive audience. “It is in the world of fermentations that we are going to find the keys to the problems around flavors, and it is what we work on at Noma Projects,” answered the awarded chef.

René, the greatest exponent of Nordic cuisine, also spoke about the future of innovation. “Now we know more and it is difficult to discover something new, but we can delve deeper into specific areas. Innovation should not only focus on a dish, but also on restaurant management: the team, the food, the values…” Provocation was also discussed as an ingredient, something that unites both chefs: “The day people don’t question what we do, everything will be over”, said René convinced, that during this edition of Madrid Fusión he has been chosen Chef of the Year in Europe. “There’s a sticking point where my ideas come up. You need to push things beyond the limits.” To finish, both chefs spoke about changing consciousness and the path towards sustainability, essential in the new future of restaurants: “We must focus on the role we play in the world more than what we put on the plate.”