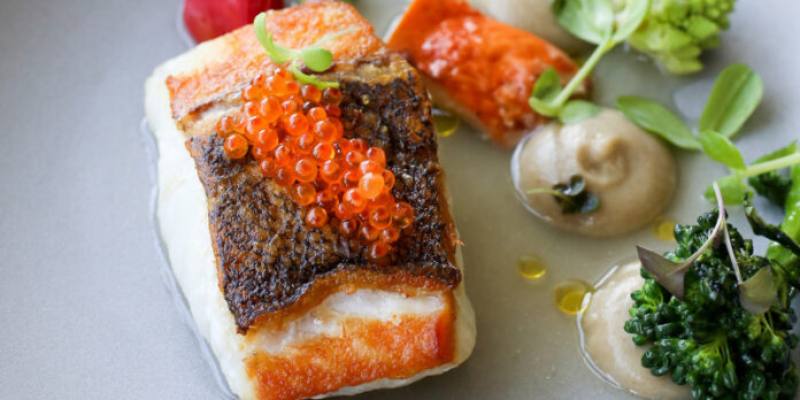 Marlena opened in the first summer of the pandemic back in 2020. While its owners, David Fisher and Serena Chow Fisher, spent their summer in their extended pop-up at Union Square’s Hotel Zeppelin, they are happy to return home now that the summer has finally ended.

When Marlena opened in the summer of 2020, there were many certainties about the restaurant’s future because of COVID-19. But the restaurant owners, David Fisher and Serena Chow Fisher defied the odds in the restaurant industry and earned their own Michelin star.
Thanks to Marlena’s new design, everything’s finally done, and the restaurant’s owners are ready for their new step. But it wasn’t so easy for them in the beginning. When the couple first purchased an old Edwardian building that now houses Marlena, they discovered that the building had no foundation, but this didn’t stop Fisher and Chow Fisher. They decided to hire local vendors to redesign their restaurant, including the kitchen with a marble bar top, stainless steel, and new flooring.

M. Chad Kellogg of architecture and design studio AMLGM also designed the new face of Marlena and the restaurant’s interior with cool colors and curved shapes. The result: A soothing interior in a comfortable setting. And this result matches well with Marlena’s cooking.
Marlena’s fine-dining menu is simple yet sophisticated at the same time. David Fisher and Serena Chow Fisher’s compatibility reflects in their kitchen, and Marlena’s prix fixe menu also vows not only San Francisco’s gastronomy lovers but also many visitors. And maybe this is the reason that the couple was able to get their Michelin stars in COVID-19’s heyday. They were able to deliver superb food while keeping it humble and sincere.