Denmark is the winning team of Bocuse d’Or Europe 2022! 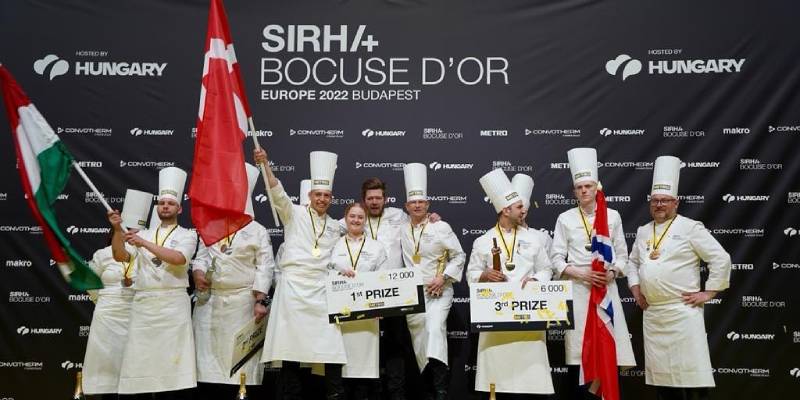 Bocuse d’Or Europe, one of the most interesting competitions of food organizations, was held in Budapest, Hungary on 23 and 24 March. In this qualifying round, 18 candidates competed for only a 10-team quota in the grand finale, which will be held in two rounds over two days on March 23 and 24, 2023, in Lyon.

Bocuse d’Or’s competitive culinary culture this year focused on traditional Hungarian products. The chef and his teams showcased the themes of potatoes, venison and duck liver on a single plate, in the competition where the contestants had five and a half hours for preparation, cooking and tanning. The excitement increased exponentially at the moments when the jury members were introduced to the audience.

Chef Ana Roš, who participated in the competition as Honorary President of Europe, talked about her work with her team at Hiša Franko, the world-famous two-Michelin star restaurant in Slovenia. Chef Roš said that their menu is the result of a joint effort with his team, and that their cuisine keeps local traditions at its heart and has more global influence.

Chef Roš, who also answered the questions about his role as Honorary President in the competition, said, “I learned all I know on my own, I worked out of the classical food logic. My work is a story that should be told to all young people, especially young girls. Cooking is not an easy choice, but when you are given such an honor, you forget all the hard times.”

This year, a special honor also given to 24-year-old Naïs Pirollet. French chef Pirollet, who broke the male tradition in Bocuse d’Or, became the first female chef to represent her country in the competition.

For the first plate theme, each team prepared a vegetarian dish based on potatoes, which is an important ingredient of Hungarian cuisine, for the jury members consisting of 14 people, while the teams tried to come up with a recipe with venison legs and duck liver, based on sour cream and cottage cheese, under the theme of the second plate. competed.

Denmark, Hungary and Norway, which will share the top three, as well as Sweden, Iceland, Finland, France, England, Switzerland and Belgium will participate in the grand finals to be held in Lyon on 23 and 24 March 2023.

. Best ‘theme on plate’ was awarded to team UK, led by Ian Musgrave of The Ritz in London.

Traces of Turkey in Bocuse d’Or Europe 2022!
Chef Emre İnanır represented our country in the European elections of Bocuse d’Or, which was held in Sirha Budapest on 23-24 March 2022 in cooperation with Metro Turkey. Currently working as a head chef of Tuğra Restaurant at Çırağan Palace, Chef Emre İnanır has worked as Chef de Cuisine and Executive Chef at five-star hotels and restaurants in many different cities of Turkey for more than 20 years, and as Chef at the Turkish Embassy in South Africa for 2 years.