Chef Anatoly Kazakov, One of the Pioneers of Modern Gastronomy, is at be Premium Bodrum 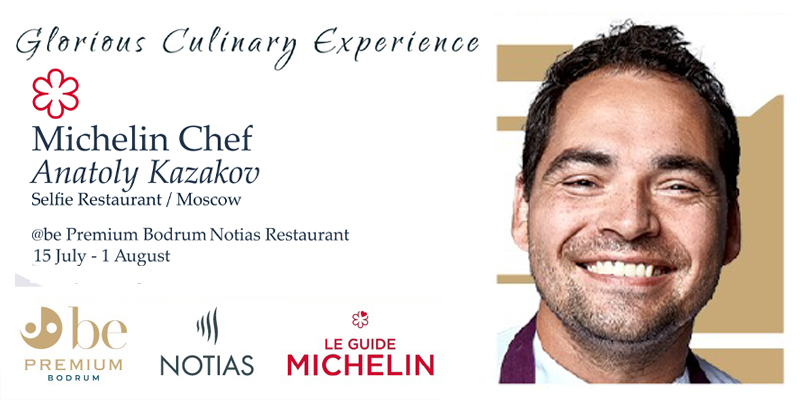 The enthusiasm of the Michelin-starred chef in Bodrum continues at full speed! Opening the door to Bodrum’s world full of luxury and splendor, be Premium Bodrum brings to Turkey the Michelin-starred chefs who have shaped the world cuisine with their passion and originality, with the support of Sözen Organization. Hosting Paco Roncero, one of the most prestigious chefs of artistic Spanish cuisine, between 1-15 July, be Premium Bodrum is now hosting Anatoly Kazakov, the successful chef of Selfie, one Michelin-starred restaurant in Moscow, until August 1. Kazakov and the successful Executive Chef of be Premium Bodrum, Veli Bayraktar, will once again offer their guests delicious moments with a pop-up event at Notias Restaurant.

After Paco Roncero, one of the most prestigious chefs of Spanish cuisine, which has hosted between July 1-15, be Premium Bodrum has now started to host Anatoly Kazakov, the successful chef of Selfie, one Michelin-starred restaurant in Moscow. On the evening of July 16, the pop-up event, attended by many distinguished names from the press, started with a special dinner at Notias Restaurant.

Kazakov, who will prepare signature plates until August 1, will offer its guests the most exclusive flavors using regional ingredients with the support of be Premium Bodrum’s successful Executive Chef Veli Bayraktar.

I Michelin Star Chef Anatoly Kazakov
Selfie Restaurant / Moscow
Anatoly Kazakov, who has become the representative of Russian cuisine, is known for identifying traditions, local products and modern techniques as the three basic principles of his cuisine. With his food philosophy, which he describes as a non-standard appearance in standard products, and his desire for sustainability, Anatoly was the winner of the “Silver Triangle” competition and was selected as the Best Young Chef 2012 and was the finalist of the San Pellegrino Cooking Cup 2012. He worked with the legendary Italian chef Gualtiero Marchesi at Moscow’s flamboyant restaurants The Most and Bon-2. In the fall of 2013, he opened Zodiac, Moscow’s first Pan-Asian bistro, offering bold experiments with exotic cuisines with Vladimir Mukhin. He now runs the Selfie Restaurant, where he serves a menu of delicacies such as sea urchins from Murmansk, scallops from Sakhalinsk in the Pacific, and ducks from Rostov in the south. Successful Chef Kazakov will be a guest at be Premium Bodrum Notias Restaurant for a pop-up event between July 15 July and Aug 1.