The World Renowed Chef Ignacio Echapresto is at Gastromasa 2022! 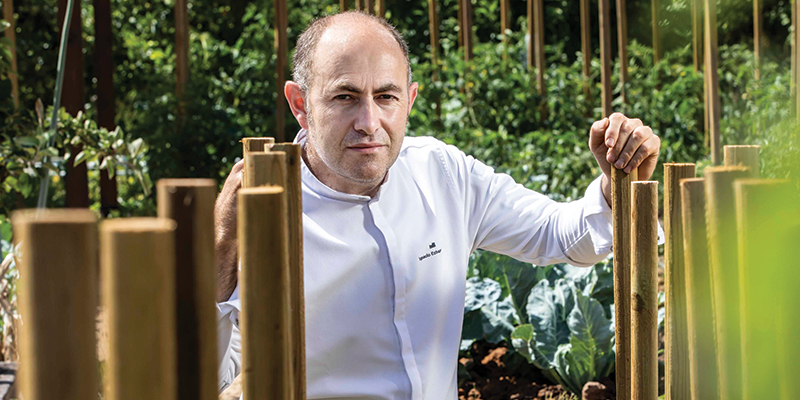 Ignacio Echapresto, one of the star chefs, is meeting with the gastronomy industry and its fans in the organization that will take place at the Haliç Congress Center.

Ignacio Echapresto is a self-taught chef, defender of seasonal products and village cuisine. This being the case, it is not surprising that he decided, together with his brother Carlos, that the best place to open a restaurant was his own town, Daroca de Rioja, a territory that they knew well and from which they could obtain the best products. Ignacio’s cuisine is a cuisine of the people, of proximity, of surroundings, of flavour, one of the main sources of supply being his own vegetable garden, which is cultivated by the Echapresto family.

Ignacio master’s traditional cuisine that he combines to perfection with some of the best avant-garde techniques because he never stops learning, being a regular at gastronomy congresses. Among his many awards are the La Rioja Quality Award for his professional career and commitment to the land, the Award for Best Chef of La Rioja and a finalist in the Bocuse D’OR. In 2011, with his hard work and perseverance, came the most awaited award: Venta Moncalvillo obtained its first MICHELIN Star, and after that turning point, Ignacio, together with his brother Carlos, have turned the discreet restaurant into a gastronomic pilgrimage restaurant of the highest world level.

Since 2011, this modern cuisine has had a Michelin star and went from being a traditional eatery to a place of pilgrimage for many national and international gourmets. In addition to this commitment to rural cuisine from their restaurant, Ignacio and his brother Carlos have been organizing “Cocinas de Pueblo” since 2019, an event that aims to be a meeting point to give visibility and give value to the kitchens that are made in small towns. from all over Spain, as well as the producers and artisans who work with them.

Like Carlos, Ignacio is an emissary of his land, La Rioja, giving talks and presentations at Spanish and international meetings where he tells of the richness of its gastronomy and culture. He has participated as a speaker at national level at Millesime Zaragoza and Madrid, Soria Gastronómica (Soria), Córdoba Califato Gourmet, Galicia Fórum Gastronómico and Madrid Fusión, among others. And on the international scene, Gastronomic Festival La Rioja (USA), Copa Gastronómica “Gols pela Vida” (Brazil), GastroAntep (Turkey), Congresso dos Cozinheiros (Portugal) and in numerous events as ambassador of La Rioja in some of the most important wine fairs and events in the world together with great wineries of his land. In 2019 he organises in his own village, in his own home, the event ‘Cocinas de Pueblo’ which aims to be a meeting point to give value and visibility to the cuisines made in the small villages of the Spanish geography and in 2022 they carry out with great national and international success the second edition of this meeting. In 2021 he received one of the most significant recognitions for him: he was appointed Ambassador of La Rioja by the Government of his homeland, something he has done since the beginning of his career both inside and outside Spain.