Franco Pepe, One of the Star Chefs, at Gastromasa 2022! 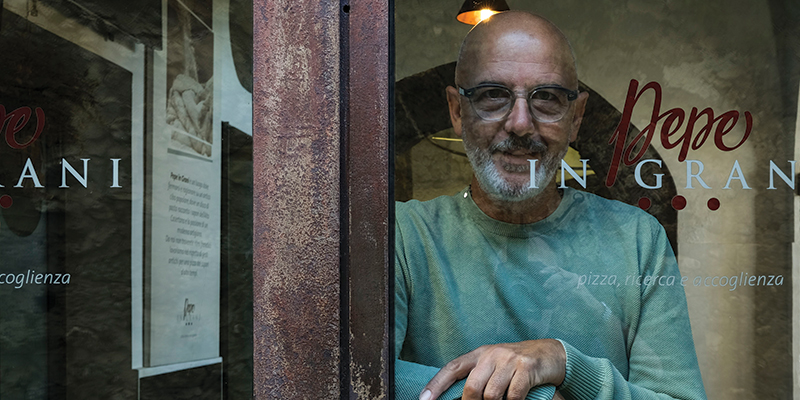 Franco Pepe, one of the star chefs, is meeting with the gastronomy industry and its fans in the organization that will take place at the Haliç Congress Center.

The dough runs in Franco Pepe’s DNA. His grandfather was a baker, his father was a pizzaiolo, and he and his brothers continued in the family business. Today, Franco is considered to be one of the best pizzaiolos in the world, famous for his unique dough, completely kneaded by hand, with creative ingredients that celebrate and reinvent the classical Italian recipes, and for his dedication to elevating the art of making pizza. Together with his father, Stefano, Franco grew up in the family pizzeria, still active in the same town, Caiazzo, which represented the starting point to his entire professional career. With the experience of two generations behind him, and inspired by a new vision of pizza, in 2012 he launched his most personal project, Pepe in Grani, which features, in each variety available, the flavours of Alto Casertano.

Chef Franco Pepe, owner of Pepe in Grani restaurant in Italy, won the ‘Best Pizza Chef’ award given by The Best Chef Awards. Franco Pepe is a living patron saint of pizza-making. Among the 19 deftly baked options is the Margherita Sbagliata (or the “wrong Margherita”), which has been named the Best Pizza in the World from 2016 to 2018. Likewise , his pizzeria Pepe in Grani has been awarded with three Spicchi from “Gambero Rosso” for ten consecutive years , ranked first in the European Cheap Eats list within the “Opinionated About Dining Guide 2020”, is listed as the World’s Most Voted Pizzeria in Daniel Young’s book “Where to eat pizza”, and was the first pizzeria to appear in the 50 Best Discovery within “The World’s 50 Best Restaurants” in 2019. His pizzas have been received awards such as the “Best Pizza in Italy”, “Best Traditional Pizza”, or “Best Pizza in Campania” by Pizza Awards Italia, and, in particular, the ‘Margherita Sbagliata ’ and ‘Crisommola ’ have been chosen as Pizzas of the Year by Gambero Rosso, and the ‘Scarpetta ’ and ’Ananascosta ’ as ‘Dishes of the Year ’ by Identità Golose.

One of Italy’s preeminent pizzaioli, Franco Pepe is a modern artisan with an age-old passion for pizza. He showcases this lifelong pursuit at his restaurant Pepe in Grani in Caiazzo, a town located about an hour northeast of Napoli. Franco’s understanding, knowledge, and craftsmanship stem from his family of master bakers; thousands of times over, he has observed and learned from his grandfather and father, together with his brothers Antonio and Massimiliano. For Franco, sensibility rules his process as the dough itself tells the pizzaiolo when it is ready.