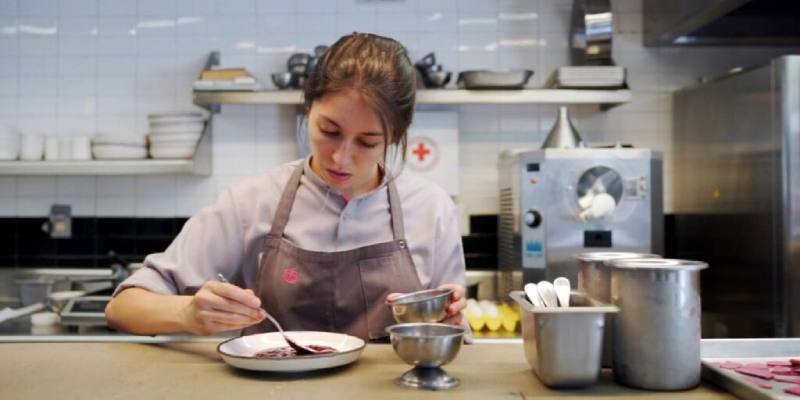 After leaving school at the age of 18, Cortina began working alongside the famous chef Enrique Olvera and discovered her passion for the kitchen at Pujol. After working in EspaiSucre in Barcelona and the legendary Pierre Herme in Paris, the Mexican chef owes his fame to the experience of intercontinental experiences she gained during the early years of her career. Sofia Cortina, now 26 years old, returned to her hometown Mexico, where she worked as pastry chef at Hotel Carlota Restaurant, headed by the another apprentices of Pujol, Chef Joaquin Cardoso.

Aesthetics and delicately balanced stimulating flavors are in the foremost of her works in the kitchen. After taking over the Hotel Carlota’s bakery Mexican chef find the perfect environment to express her original ideas, using the different pastry techniques she learned from all over the world.

Learning traditional Japanese pastry techniques from Takeshi Somekawa at Dos Palillos in Barcelona, ​​Sofia Cortina reinterprets flavors like mochi, a Japanese dessert made with rice flour. One of the most interesting and perhaps the most daring desserts of Sofia Cortina, which attracts attention with its creative and different combinations, is avocado ice cream.

Cortina adds her own interpretation driven by fruits to many different dishes from French cuisine such as coulis sauce, meringue cookies and light sorbets, also likes to use of edible cactus plants in her desserts.