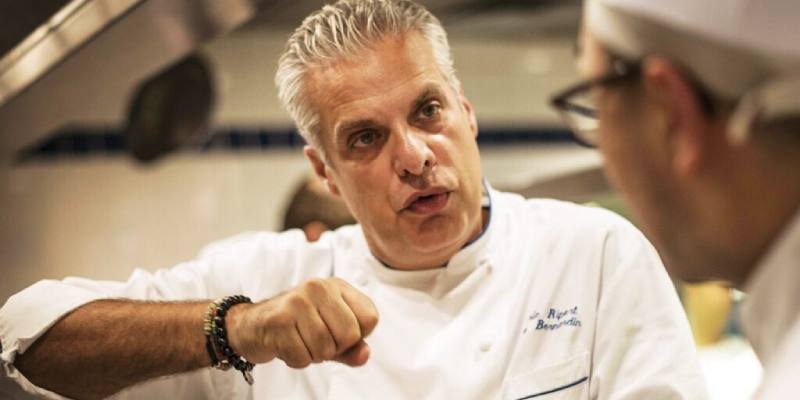 In the world of gastronomy, there are two things that come to mind when you think about Eric Ripert: He is always smiling, positive and creates wonders with fish! Both are very accurate and on-the-spot descriptions for the chief of Le Bernardin, who owns three Michelin stars in New York’s pioneer venues.

Eric Ripert who spent the first years of his career working at the famous restaurants of France, reached the international recognition at the age of 20. Finally his reputation leads him to the opposite side of the Atlantic. In 1989, after working as a sous chef in many important restaurants in the USA, Maguy and Gilbert Le Coze invited Ripert to Le Bernardin as a chef. Since then, Eric Ripert has become one of the most successful chefs, not only in New York but in the world.  Ripert’ doesn’t have a second or a third restaurants in many different locations like many other succesful chef. He says he doesn’t even understand that concept. Chef Ripert, who states that flying from one restaurant to another just isn’t for him, says he feels very happy to see his family in the restaurant, where he walks through Central Park for 45 minutes every morning.

Happines is a key to success

Le Bernardin is the only restaurant in the world that can be maintained the 4-star rating of the New York Times for more than 20 years, besides its 3 Michelin star, 26th place in World’s Best Restaurants List and New York 1st place in the Zagat Guide!

Chief Eric Ripert explains the secret of his success by saying it is very simple: Being happy!

While he was one of the chefs (which he calls a cliche) who is extremely authoritarian and constantly yelling at his staff, he observed that this situation had a bad effect on his surroundings and no benefits. He believes that with an optimistic atmosphere you can get much better results.

Giving back and contribute

In 1989, he read a book about Tibet and met with the philosophy of Buddhism. And after that he started to follow the Buddhism philosophy in every aspect of his life.In addition to teaching how to respect the lives of the products he used, Buddhism allowed him to discover that creating a peaceful environment in the kitchen had great results.

In addition to his six books, Ripert was also in the jury of Top Chef for television and the he had his own program, AVEC ERIC.

Eric Ripert, had a solid friendship with the late chef Anthony Bourdain, who we lost tragically last year and he used the join as guest host to his No Reservations and Parts Unknown tv shows frequently.